An open letter to New York band 'The Strokes'

Hi, Chris here from rock band 'Anguish Sandwich'. Hey, turns out we are playing at the same festival(s) as you next weekend, Reading + Leeds, R+L! Should be fun I guess, lots of people there to see our bands play the songs we have written. Hope some moshing breaks out. Or a circle pit. Have you ever seen a circle pit? They happen at metal gigs and I think there are like 2 variations, one of them is where the crowd seems to turn in to a giant human whirlpool and starts going round and round in circles and a lot of people end up falling and getting trampled, the other type of circle pit is where an area opens up in the crowd and several people take turns charging in to the open area and smash in to each other and sometimes punch or knee each other 'in a friendly way'. Actually sounds pretty scary.

Anyway, just wanted you to know how much I am looking forward to seeing you, 'The Strokes', play at R+L. You guys seem like cool guys. I remember when that one album you did came out and it was called 'This Is It' and everyone in the world or in the UK was losing their minds saying you had saved rock and roll or something. That must be a lot of pressure right? How did you feel about that? I mean, I guess you made a lot of money that year but still it must have been tough to have the responsibility of saviours or messiahs? Can't wait until you play that cool song, 'Last Nite', that song was cool.

If you have the time you should come and watch 'Anguish Sandwich' play because we are playing on the same day(s) as you are. We are playing on the BBC Introducing stage at around 4.30 or 5pm. I figure it will probably be a smaller crowd than the crowd for when you play so you could probably get right to the front if you wanted. Oh, or maybe you could do that thing where other famous people stand at the side of the stage and watch, I think we'd be ok with that, but I'd have to check with John and Cath because it could be a distraction. Maybe if you wanted to stand at the side then you could let us come and stand at the side when you play and then people in the crowd will be all like "hey, who's that guy with the curly hair up at the side of the stage watching 'The Strokes' play?" and their friends or another stranger in the crowd will say "I think it's the guy what played in that band 'Anguish Sandwich', they rocked the BBC Introducing stage earlier, seriously rocked it" and then someone else will say "or maybe it's the drummer from 'Yuck'", either way it'd be a sweet thing to do.

Thanks for reading this you guys, see you soon, don't forget to say hi.
Chris, Anguish Sandwich 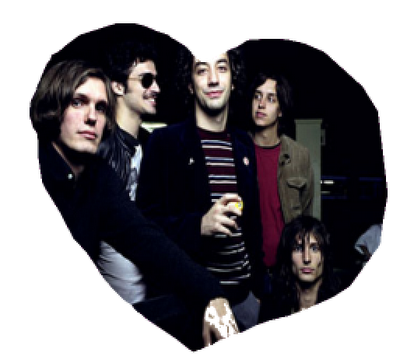